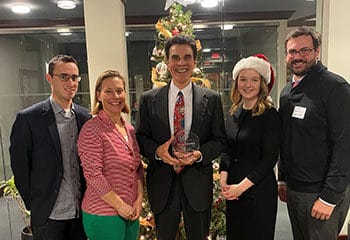 CENH is a non-profit organization focused on promoting clean energy and technologies through education and advocacy for a stronger economic future. The organization’s Champion of the Year Award recognizes individuals who demonstrate leadership roles in the transition to a clean energy future. Giunta, who is currently serving his fourth term as Mayor of the City of Franklin, NH, was honored to accept the award.

Throughout his career, Giunta’s major area of interest has been the renewable energy market. “As a young professional,” Giunta recalls, “renewable energy was only a dream. Today, technology and science have merged to change civilization as we know it. I wake up every day excited to work on projects that only a short while ago were considered science fiction.”

Giunta has devoted nearly three decades of his life to protecting our environment. Through his many roles at the New Hampshire Department of Environmental Services, he not only oversaw the cleanup of contaminated sites, but also worked with businesses and municipalities to prevent future environmental degradation. But his passion has always been in the energy sector. That passion led him to become the founder of American Energy Independence Company, a New Hampshire-based firm that manufactures environmentally-friendly, renewable non-petroleum-based products. In his current role at the Nobis Group, Tony works with developers, elected officials, regulators, and contractors to create alternative energy solutions that better the communities they serve. In his role as Mayor, Tony has actively supported efforts to bring clean, affordable, renewable energy to New Hampshire and the rest of New England.

“We are proud to have Tony as part of the Nobis team and congratulate him on receiving this noteworthy award,” Ken Koornneef, President and CEO of Nobis Group, stated. “Tony’s dynamic and steadfast commitment to promoting clean energy is very much in line with our efforts at Nobis Group to remain a leading renewable energy firm in the region. We are thrilled Tony has received this well-deserved recognition for his work.”