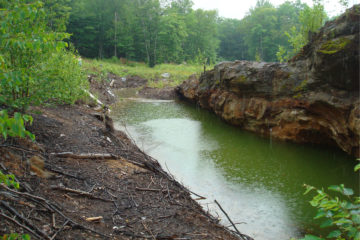 Located in South Strafford, VT, Elizabeth Mine was an abandoned copper and iron-sulfate mine that ceased operations in 1958. The $20 million remediation project involved the removal of hazardous waste that had developed during the mine’s more than 150-year lifespan. The New England District USACE teamed with the U.S. Environmental Protection Agency and a consultant team including Nobis Engineering, Inc., to remediate the 43-acre site, a project which was completed ahead of schedule and more than $600,000 under budget.

Nobis Engineering has been involved with the project since 2011; we were awarded the American Council of Engineering Companies/Vermont Section 2013 Engineering Excellence Award. More information about Nobis’ services on the project may be found here.

Detailed information about the award may be found here.