Why Getting to Know Your Abutters May Save Your Project 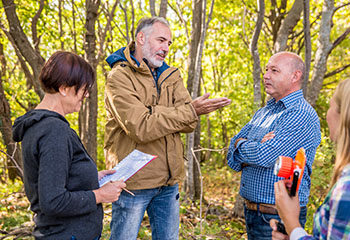 By Chris Nadeau, PE, Director of Commercial Services
Abutters can kill your project – or at least cost you a boatload of time and money.

Here’s a secret – if you want your project to drag out and cost you more money, or even kill it, you should ignore your abutters. I have been to countless planning board public hearings where we hoped none of the abutters would show up or even convinced ourselves – how could anyone oppose such a great project?

Nothing makes a planning board more uncomfortable than having an abutter standing before them demanding that a project be rejected because of traffic, noise, devaluation of property, additional tax burdens, stormwater runoff. I could go on and on.

So, what can you do to prevent this? Make your worst enemy your advocate. Reach out to the abutter who you think is going to be your worst enemy and ask if they would like to meet ahead of time – at their kitchen table. See if they would like to invite some of the neighbors. You make them look like the hero of the neighborhood and you put them in full control while actually controlling the entire process yourself.

A meeting with your abutters adds a personal scale to your project – after all, you are a human being, trying to make a living just like them. You can answer questions, alleviate fears, and quell rumors and mistruths before you get to a public meeting. A possible added bonus – you may even find an advocate for your project. Advocates rarely show up at a public hearing.

Even if your abutters refuse to meet with you, at least you can tell the Planning Board that you tried to facilitate a meeting, but nobody was interested.

Nine times out of ten, once you get to the Public Hearing, the abutter comments will be avoided, or at least minimized and will make it a lot easier for the Board to approve your application. Just remember, nobody likes change, but if you can prepare for change ahead of time, it makes it a lot easier.

I own a small summer cottage in a rural Maine Town abutting an undeveloped commercial lot in a wide-open field. I purchased the property knowing full well that it would eventually get developed by a commercial business. When I received an abutter’s notice last fall for an application to develop the property, I immediately went to the Town Hall to look at the application. I was outraged and emotional about what I saw. I promptly wrote a two page summary of what was wrong with the project and what needed to be done to make it right.

Now I’ve pitched hundreds of projects before Planning Boards and I know very well how it feels to be on the wrong end of an angry abutter. After reading through my letter, I tempered the letter a bit more, to sound a little more sympathetic. The Board eventually approved the project, with many of the conditions that I had outlined in my letter.

Two weeks after the Planning Board meeting, I saw the business owner out cutting his grass and we began chatting. After I found out that he was actually a human being, not a money hungry corporate developer, I felt a little guilty. I sympathized with his position as a new business owner trying to make a living to support his family. We came up with several ideas to help him satisfy the conditions of his approval and get the business open.

Imagine if we had met before the public hearing?