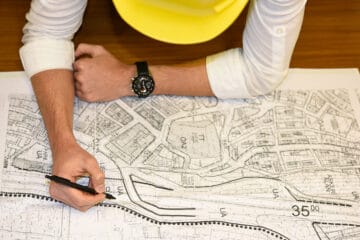 Throughout the United States, and particularly in New England, developing renewable energy projects can be a challenge. If you’re a renewable energy developer you must be thinking, “But we just elected a pro-renewable energy administration, government incentives abound, and there’s plenty of low-cost investment capital available for the taking”. In other words, it looks like a very favorable time to go hog-wild with development. May I suggest that, before treading too far down the development path, one considers these top 5 reasons to team up with a Civil Engineer early into a renewable energy project.

Reason #5: Although they sometimes catch a bad rap as a seemingly pessimistic and persnickety group (as opposed to developers who are among the most optimistic people on the planet), Civil Engineers bring a pragmatic voice to the table and their presence – or lack thereof – can make or break your project. A Civil Engineer will compare the goals of the developer against cold hard reality. They’ll often perform a “Fatal Flaw” analysis that looks at wetlands, elevation changes, subsurface conditions, potential environmental concerns, and other factors that could seriously derail future development goals. The cost for these services is generally “chump change” compared to avoiding the tens, if not hundreds, of thousands of dollars in costs related to unforeseen problems arising from having overlooked any site constraints early on.

Reason #4: Everyone wants renewable energy until a project is proposed in “their” community. Then it’s “Sorry, love your idea, but we don’t want it near us!” Experienced Civil Engineers know the lay of the land and can tell you in which communities you’re most likely to succeed and, more importantly, where you’re most likely to get run out of town on a rail! Knowing this information will save you time, cash, and boatloads of agita.

Reason #3: To achieve a successful project, you’ll need federal, state, and local permits. Having worked with the regulators who review these permits is critically important. We’re all human and, as such, are wired in unique ways. An experienced Civil Engineer will often know these regulators and their idiosyncrasies, providing an advantage when it comes time to submit permit applications. Not only will your Civil Engineer guide you in supplying the requested information, they will also help you tailor it in a way that caters to that individual regulator’s review style. Whereas most permits have statutory response deadlines, those deadlines often “reset” each time the agency requires more information. Getting your permit application filled out right the first time can save months of back-and-forth, costly paper shuffling. Done incorrectly, these delays can set your project back an entire construction season.

Reason #2: Like regulators, local land management boards (think planning and zoning boards) also have their own “pet peeves” when it comes to satisfying local ordinances. An experienced Civil Engineer will have both presented to and learned (under fire!) what these boards look for in an approvable application. Getting them the right material early can again save time and money obtaining your needed local approvals.

Reason #1: And finally, we all know that a project lives or dies based on abutter acceptance or opposition to a project. I’ve witnessed first-hand the abutters, not the landowner, having way more sway with local land-management boards on deciding what’s allowed and not allowed on a landowner’s property. Again, an experienced Civil Engineer will work very early and very closely with project abutters to explain exactly what’s proposed. If there are abutter concerns, the Civil Engineer will work to address those concerns before they are entered into the public record at what are often very heated and emotionally-driven public hearings.  Allaying fears before they become publicly pronounced crises can be THE single most important step towards being able to successfully bring your project to realization.

So there you have it, five key and crucial reasons to hire a Civil Engineer early on in the process of planning your renewable energy project. With this understanding of their incredible importance in getting projects approved and built, I suggest you go out and hug a Civil Engineer the next time you meet one (abiding by CDC guidelines, of course)!