Progress and Preservation Can Coexist: Spearheading Redevelopment in Downtown Franklin 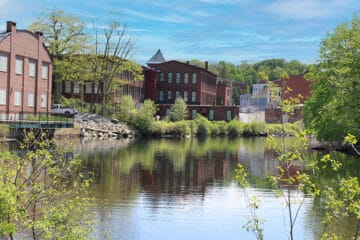 For those of us who live in New England, driving by blighted mill buildings and vacant downtowns is an all-too-common experience. Of course, it wasn’t always that way. During the Industrial Revolution, New England’s abundant rivers and streams powered those once mighty mills which, during their heyday, led our country and the world in industrial output.

Then, beginning in the 1970s and continuing into the early 21st century, cheap labor and fewer regulations drove New England manufacturers overseas, leaving those quintessential rural mill towns with a lot of open lots, empty buildings, and broken hearts.

Franklin is located in central New Hampshire and is very much a “mill City”. Like others, this once industrial powerhouse was staggered by the closing of its iconic mills and has since struggled to seize upon the next great opportunity that would again restore the vibrancy and opportunities those once bustling mills provided. Tony Giunta, the City’s former Mayor said, “We were struggling to seize upon something to provide a spark that would lead to revitalization of our downtown.” That opportunity finally came knocking via the CATCH Neighborhood Housing project.”

In 2015, CATCH purchased the dilapidated River Bend Mill in downtown Franklin with the intention of redeveloping the former industrial mill into a new affordable workforce housing complex. The River Bend Mill is located within the Franklin Falls Historic District: a 75-acre area that encompasses most of the civic and industrial heart of the City. If revitalization were to occur, it had to begin in this District. As Giunta noted, “For decades, the City of Franklin had worked to encourage outside developers to invest in our downtown. Many projects were proposed, but all failed to make it to completion. We all knew a successful CATCH project would be the spark we needed to start that revitalization fire.”

In the years leading up to this project, the City worked with the nonprofit organization Plan NH to complete a design charrette for the redevelopment of the Franklin Falls Historic District. The City was able to receive feedback from the community about their needs and concerns regarding redevelopment. Among the items discussed was the community’s desire to see progress while retaining the historic appearance of its iconic historical buildings.

To satisfy the communities desires at Riverbend Mill, Nobis Group’s engineers were able to salvage the buildings infrastructure, eliminating the need for building demolition and new construction. Additionally, Nobis’s site design was able to achieve the community’s goals of improving roadways and parking as well as creating green space for recreation and access to the riverfront.

During the early 20th century, a portion of the river was infilled and an addition to the building was constructed on the created surface. Nobis’s geotechnical engineers determined that in these areas of the mill the subsurface conditions were not suitable for construction. Nobis was able to provide recommendations and alternatives to support renovation and construction in these areas using underpinning techniques.

Nobis completed the environmental assessment and hazardous materials abatement achieving the due diligence requirements needed for CATCH to secure the necessary financing. Nobis also successfully completed site engineering and design to meet the objectives of the client including providing solutions to areas of the building where foundations needed improvement.

The successful River Bend Mill redevelopment was beneficial in many ways. The project also achieved many additional goals that the citizens of Franklin hoped to realize as downtown was redeveloped. These goals included attracting people to live in their downtown, improving roadways and traffic, connecting neighborhoods to downtown areas, encouraging uses that relate to the river, and, most importantly, improving downtown Franklin while retaining the history of its buildings and industrial heritage. Mayor Giunta summed it up this way, “The primary benefit of restoring this former mill was to provide badly needed affordable workforce housing options for the community. But, on a grander scale, tens of thousands of people witnessed a cold lifeless building coming back to life. It went from eyesore to grandeur. It was a very visible reminder that our City had turned a significant corner and like this CATCH project, our downtown was coming back to life.”

Subsequently, the restoration of River Bend Mill (now renamed the Franklin Light and Power Building) has inspired stakeholders to evaluate other underutilized industrial complexes within the City for their redevelopment potential. Currently, a major developer is revitalizing the abutting Stanley Mill – Franklin’s largest downtown mill. This project is a mixed-use, multifaceted rehabilitation and will be the largest single investment in a downtown redevelopment in Franklin’s history. This, along with other on-going restoration projects, will encourage business and industry development, job growth, increased tax base, and population growth. “Clearly the City of Franklin is experiencing a renaissance,” notes Giunta, “but that renaissance can all be traced back to CATCH – the one developer who took a chance and invested in a City with great potential. I don’t know if they ever realized their investment “spark” would lead to our redevelopment fire!”