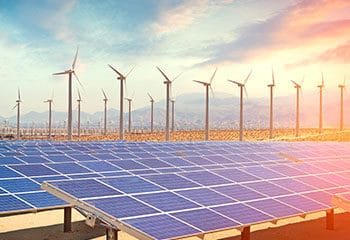 By Tony Giunta, PG, Director of Project Development
I’m sure many of you have heard of World War Zero? It’s John Kerry, Leonardo DiCaprio, and Arnold Schwarzenegger’s latest attempt to remind civilization that unless we rally together to solve climate change, civilization as we know it will perish from the face of the earth.

Instead of rehashing the same old doomsday scenarios (which clearly aren’t working), I wish they would better prepare us for a society that switches from high density energy sources to much lower density ones.

It’s taken planet earth millions of years to essentially convert solar energy into high density fuels such as crude oil and coal. We as a species have figured out how to extract all that stored energy essentially instantaneously. So, when we build a coal burning electric plant that produces 500 megawatts (MW) of electricity, the entire complex only has to cover a very small parcel of land. Why? Because coal packs an enormous energy punch per pound, and we merely have to get that fuel into a boiler, release its energy, then send it to our homes and businesses.

If we now attempt to replace an energy dense fuel like coal with wind turbines, we must realize the energy contained in wind is much less than that which took mother nature millions of years to concentrate into a lump of coal. To compensate for this energy density disparity, we need to capture a whole lot more low-density wind. How much more? Well, to produce the same 500 MW of electrical energy using wind turbines, we would have to spread those towers over more than 30,000 acres of land. If you want to produce the same amount of power using solar, get ready to see those panels spread across 2,500 acres.

Bottom line, right now we can and are moving towards a more renewable sustainable energy future. But as Sir Isaac Newton said, “for every action… there’s a reaction” and that reaction will be a vastly different landscape. Because of that major disparity in energy density, wind turbines must occupy every location on earth with windspeeds capable of pushing a blade. Solar panels must be wherever there’s enough sunshine to energize their cells.

“OK”, John Kerry would ask, “then what’s the problem… if we can replace fossil fuels with renewables and save the planet, why don’t we do it?” Well, Senator Kerry, what I’ve found throughout my career is everyone wants renewable energy-until a project comes to their town. Then the pitch forks and torches come out and developers are told to go somewhere else!

So, my advice to you and your fellow doomsayers is stop trying to scare the hell out of everyone by forecasting Armageddon and instead educate us on what a totally sustainable renewable energy world will look like. Because until society embraces the look as much as it embraces the concept, World War Zero will only cause World War III between developers and local citizens.